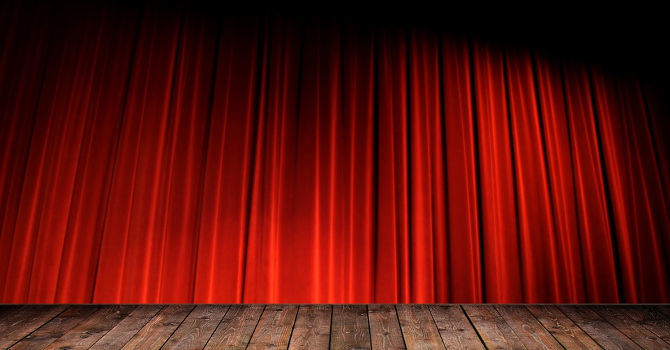 If you are planning a play or musical the best advice from the tech point of view is to plan ahead and involve the tech department as soon as possible as last minute changes can be difficult to make. If planned ahead and used properly, the tech department can add those special touches to make your play truly magnificent. Some things to consider when planning:

What will you require for lighting? What is the mood (general lighting) you would like for each part of the production? Are there any special parts that need highlighting or spotlighting?

How will the stage be set up? Typically the drums and piano are always on stage. The drums are fixed in place although the piano may be moved to another location on stage. Also, what other instruments will be required on stage? If the play occurs during a service the worship team will require some space on stage.

How many mic's will you need and what type? One of the biggest issues with amateur performers is not projecting their voice so we recommend individual mics and not mic'ing the stage in general. We have some headset type and handheld type wireless mics as well as handheld wired mics available for use. If we do not have enough we can rent additional mics which are typically lapel or headset types. Advance notice for this is especially important for holiday productions as rental equipment is in high demand.

Will you need any projection? If you do, please see the guest media guide for formats.

Will you need any audio played? If you do, please see the guest media guide for formats.

Every performance is different and has different needs during the rehearsal phase. We generally recommend an early meeting between tech and director as well as two or three rehearsals with techs present, not including the dress rehearsal. The more communication in between the techs and the director the smoother things will run during the performance.

The meeting with the director should be fairly early. Topics of discussion should include the planning points mentioned above, any other general or specific points that are already thought of, and also what our a/v team is capable of. A copy of the script should be provided to the tech department at this time.

The tech planning rehearsal should take place once the basic blocking (positioning) is in place. The a/v member will watch and discuss with the director and make notes about cues and scenes so that a plan for tech can be created. If the tech requirements are simple enough and the director provides notes, this rehearsal can be skipped.

The tech transition rehearsal should be after the blocking is finalised. This rehearsal should be for the techs to finalize settings and cues as well as for the director to get an idea of how the tech will look. This is for practicing transitions only and there is generally not enough time to run through full scenes. Although changes should be avoided if possible after this, any changes that are made should be communicated to the a/v team as soon as possible.

The official tech rehearsal should be essentially a dress rehearsal with mic's and full tech but without costumes. Performers should allow fifteen minutes before rehearsal to get their mic's.

Lastly there is the dress rehearsal. Last chance for practice, show time is almost here! Once again, performers should allow fifteen minutes before rehearsal to get their mic's.

As with rehearsals, performers should allow fifteen minutes to get their mic's.