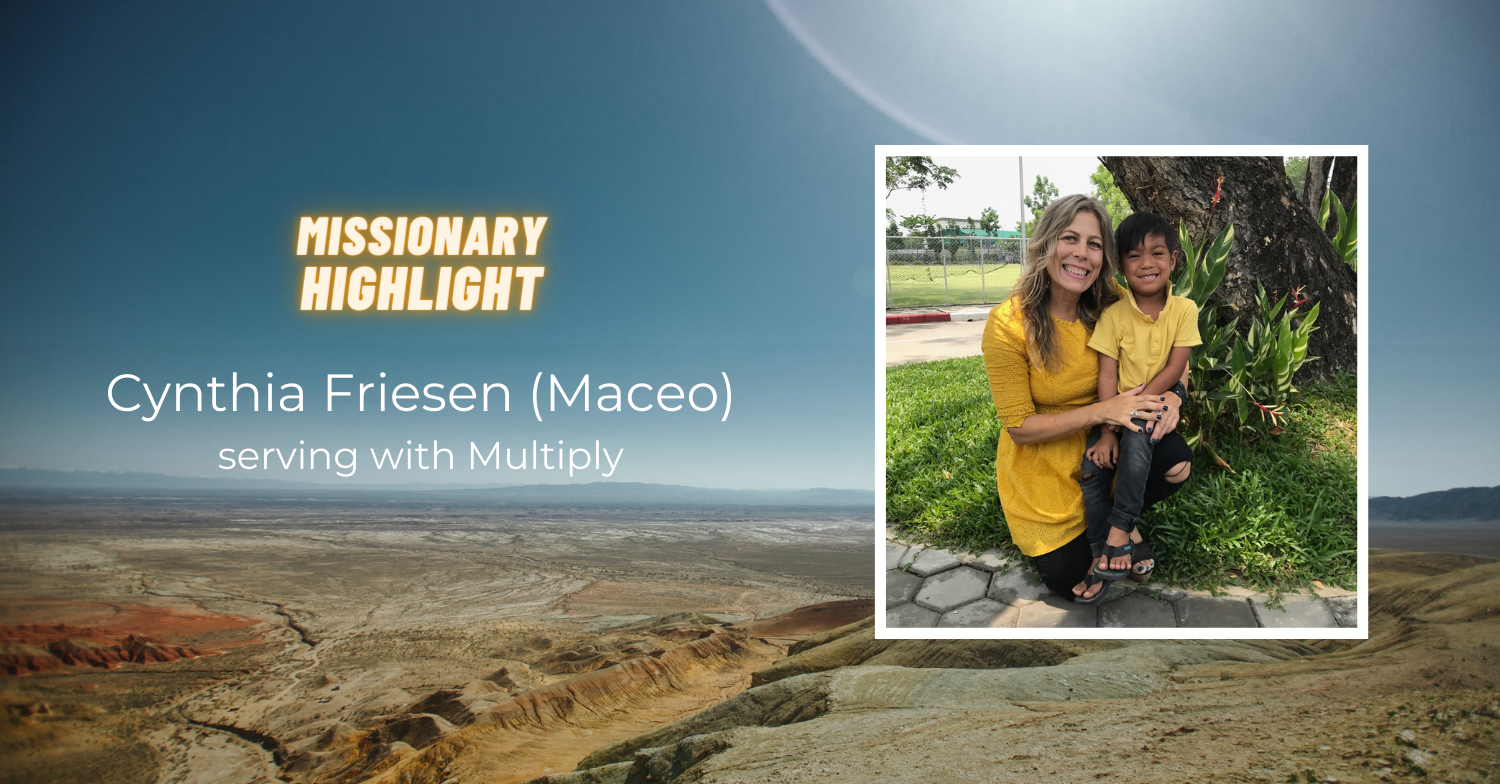 Over the past months, Cynthia has been reporting to us about many exciting spiritual developments and baptisms, as well as some intense opposition facing the newly baptized believers. Some of the young students facing abuse have run away from home, going missing for periods. We implore you to pray for courage and safety for the students in Thailand who are taking courageous steps of faith despite opposition. Cynthia has asked us also to pray for “fruit and [for] their testimonies to draw many more to Jesus.”

We invite you to pray for Cynthia as she supports these young people and feels the weight of the difficulties they are facing. And we invite you also to pray for her son, Maceo, who is growing up amidst spiritual warfare.

Thank you for being a praying church, and may the Lord hear us as we lift up Cynthia, her son, and her ministry.

Listed below are some of the specific prayer items forwarded to us from her mother, Joy Friesen:

“Praise God for the 13 people who got baptized on April 30. I am very grateful that my parents were here to witness this and meet the women and some families of the Naomi House project and the thriving Shalom farm.

Praise God for Aire, our MB foundation secretary and her faithful husband, who are such a great help with our ministries here. Praise God for their growing faith even after their baptism. There have been many spiritual battles after this baptism at the retreat centre ~ but we witnessed God’s supernatural miracles, some of them right until the 11th and 12th hour. We give God all the praise and glory for so many answered prayers.

Sang Sing, the oldest daughter of the girl who had been rescued from the soldiers who were pursuing her in Myanmar, accepted Jesus last week, and she is now also part of Naomi House care and able to attend school, which was such an answer to prayer. Pray for Sang Sing (11), her parents, sister Manna (6) and 5 other Buddhist families of this Tai Yai tribe from Myanmar whom they are reaching out to and are so open to the gospel.

Several of the Naomi House families were under spiritual attack.

Praise God that Janya’s son, who was missing and discovered in another country, was miraculously rescued and returned to Thailand. Please continue to pray for his safety and for his family. Through this horrific experience, he gave his life fully to Jesus.

Padong, with her four flourishing girls, was an active part of the spiritual and sewing part of the Naomi House. The day after her oldest girl was baptized, Padong’s x husband forced her and her daughters to return to her village 3 hours north, even though he would not be living with them. Although this was extremely difficult for all of them, and the girls would now not be attending school anymore and out of the fellowship and discipleship of Naomi House, she obeyed and is now leading Bible studies near her new home in Chiang Rai.

Mai’s daughter Prey (13) was threatened by her father when he showed up at her school to bring her home to his village many hours away. Even though he did not care for Prey, he did this to spite his wife, who he expelled from his home when he got a new wife. Prey, who had been suicidal when Naomi House rescued her, was now safe and thriving in school. After much prayer, the father agreed that she could live with a relative but not her mother.

Pray for Siriwan, our team leader, and for these women and their families as Siriwan directs the Naomi House. Pray that they continue to grow in their faith and reach out to so many in their community. Pray also for Siriwan’s husband Wichian, who runs the Shalom farm where he provides work and shelter for family members of Naomi House and families from Myanmar. Please pray for provisions to build proper housing on the farm for these families and for the 5-6 families of the Myanmar Tai Yai tribe to come to know and love Jesus.

Praise God that Siriwan and Wichian and 3 other Thai leaders were able to go to Curitiba, Brazil, for the ICOMB conference and be introduced to the greater world MB conference of churches.

Thank you for your faithful prayers as God continues to grow his Kingdom in Chiang Mai and beyond in Thailand.”